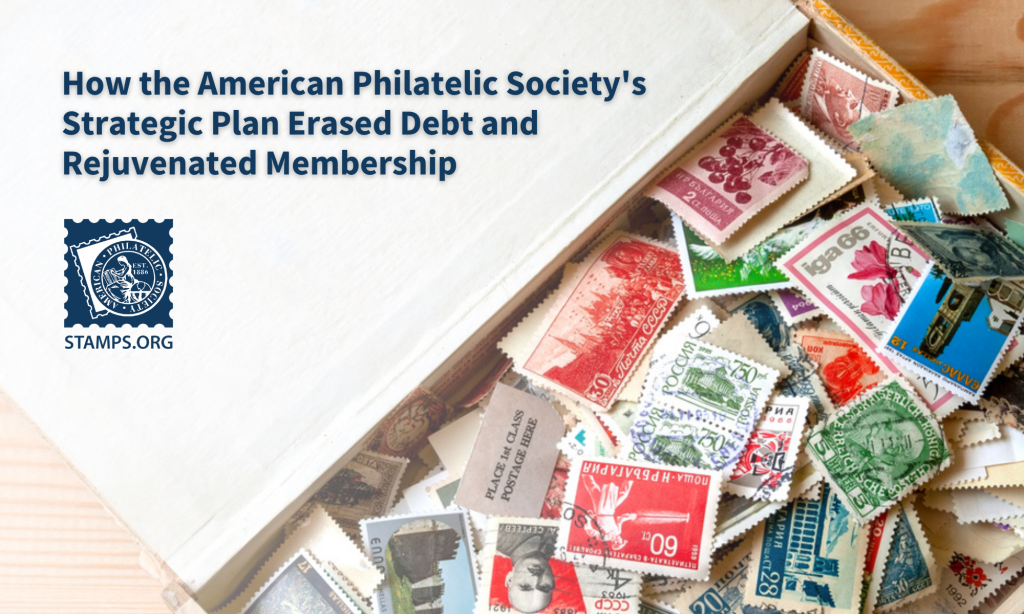 Professionals for Association Revenue is proud of the work of our member organizations. In this member spotlight, we highlight how the American Philatelic Society erased a large debt and rejuvenated a declining membership through strategic planning and implementation.

In the world of stamp collecting, the less a stamp deviates from its original state the more valuable it becomes. The same is not true of associations – organizations that fail to adapt to the evolving environment around them struggle to generate revenue and maintain value. This was the case for the American Philatelic Society (APS) who in 2016 had reached an all-time high in debt and an all-time low in membership – a catastrophic combination for an association’s revenue health.

“At some point, the organization stopped evolving,” says Scott English, Executive Director of the APS, the largest non-profit organization for stamp collectors in the world.

Seven years into English’s tenure, membership is on the rise and the association is debt-free. The following is a look at how this Professionals for Association Revenue member organization implemented a strategic plan that erased its debt and rejuvenated its membership.

The Decline of Revenue Health

The APS’s debt, while problematic, began with good business intentions. Looking to diversify revenue streams, the association moved its headquarters from State College to Bellefonte, Pennsylvania in 2002. There, it bought and renovated a 100-thousand square foot building intended to house its offices, a world-class philatelic library, and revenue-generating tenants. But the cost of the renovations combined with the volatility of the real estate market (both on this mortgage and others) landed the association in 5.4-million-dollars of debt.

Further amplifying the association’s debt was the decline of its largest revenue source – its membership.

With members in more than 110 countries, the APS is the largest, non-profit organization for stamp collectors in the world. Founded in 1886, the APS serves collectors, educators, postal historians, and the general public by providing a wide variety of programs and services. The Society is entirely supported by membership dues, gifts, and the sale of publications, specialty items, and services.

After the association’s membership numbers peaked in the late 1990s, they plummeted in half to reach a low in 2016. Some of the decline was attributed to member deaths – 80-percent of APS members were over the age of 60-years old at the time – but a substantial part of the decline was the direct result of two separate membership dues increases. Over a five-year period between 2003 and 2008, the APS raised annual dues from 25 to 45-dollars. It proved to be a hefty increase for the hobbyist organization, and membership dropped by nearly 22-percent.

English spent his first two years on the job traveling the country to better understand the association’s value proposition. He met with longtime APS members to learn about the philatelic hobby, establish personal relationships and determine a path ahead for the organization. In 2016, he unveiled a new strategic plan with the goal of eliminating the association’s debt in 10-years. Four years later in 2020, he and the association had succeeded.

A Strategic Approach Toward Revenue Health

The path to revenue health began with a focus on the central mission of the APS which is to preserve and promote the collection and history of stamps. With the mission at the forefront of its strategy, the APS worked to fill a need in the philatelic market. It’s a formula that worked for this hobbyist organization, but English says it’s one all associations can benefit from.

Here are five strategic changes the APS made to its operations, culture, and overall mindset that any association working towards revenue health could explore.

Distribute Costs to Members Who Use a Service. Counterfeits and forgeries exist in the philatelic world in the same way they exist in the art community. There is a need in the market for stamp collectors to know if a stamp in their possession or on their radar is fake or genuine. For years, the APS advertised and offered its philatelic expertizing service largely as a member benefit. But a financial analysis showed that the program had cost the association nearly 150-thousand dollars over the previous five-year period. Furthermore, the organization recognized that while the service was provided to all members through membership dues and a small fee, only 5-percent of members took advantage of it.

“Everyone was underwriting an operation that only a few people used – every single member of the organization shouldn’t be underwriting the fees that are associated with the service,” English says.

As a result of its findings, the APS adapted the business model to distribute the cost of the program to those who used it and developed a fee structure that no longer required the supplemental support of membership dues.

Follow the Data and Eliminate Low Performers. Advancing an organization forward often entails leaving certain elements behind. Associations can look to the data to determine which operational elements are no longer functional. The APS ended its involvement with one long-standing stamp show after the data showed a 45-to-60-thousand-dollar loss from the show each year. The data from a cost-benefit analysis of the 30 remaining stamp shows attended by the APS showed the association should stop attending nearly two-thirds of those shows – the cost to attend was far greater than the benefit of gaining a handful of new members at each show.

Look at Existing Elements in New Ways. Switching from automated website advertising to paid digital advertising resulted in a revenue increase of roughly 35-thousand dollars in one year for the APS. Additionally, the association changed the function of its newsletter to bring in advertising dollars while also attracting new members. Originally viewed as a member-only publication that reached 19,000 collectors, the newsletter is now the association’s strongest marketing and promotional tool landing in the inboxes of nearly 70-thousand people.

“We started packaging it as an advertising sales opportunity,” English says. “I am seeing exponential growth because I grew the market and then went out and aggressively sold it.”

Find the Potential in Current Members. Creating a community in which members work to advance an association’s mission is key to developing an active membership base. English says the APS returned to this philosophy after years of focusing on recruitment instead of creating and promoting the value of membership.

Recognizing that stamp collecting is a peer-to-peer teaching hobby, the association now harnesses the expertise and passion of its current members to appeal to philatelic enthusiasts of all backgrounds, experience levels and skillsets. The most advanced collectors of the APS now write for the association magazine and take part in “Stamp Chats,” a video series addressing relevant aspects of the hobby.

“The purpose is to bring knowledge of the people who have it to those who don’t,” English says, all while engaging members in a purpose of their own.

Keep an Eye on the Future and a Pulse on the Present. An examination of APS membership demographics showed a need for membership modernization. By 2015, 15-percent of new member applicants were under the age of 50, while 56-percent were between the ages of 60 and 80-years old. English says it wasn’t that a younger generation was uninterested in stamp collecting, but that they didn’t see the value in the APS itself.

Understanding that younger generations are accustomed to having access to resources on-demand and often online, the APS created a digital membership for hobbyists under 30-years old. The association is also working to digitize every journal housed in their world-renowned philatelic resource library to ensure that stamp enthusiasts around the world can access the library resources. “It will make us the go-to resource for research without an individual having to show up at our doors.”

As the APS works to modernize operations and appeal to a new generation of collectors, English says they remain focused on respecting the members they have while still finding ways to attract the members of the future.

These strategic steps – along with an unexpected financial boost thanks to the gift of a generous donor – have helped the American Philatelic Society continue on a path to revenue health. As it stands today, the APS has nearly 28,000 members in over 100 countries across the world. English says 2021 was the association’s strongest recruiting year since 2008 and yielded the biggest membership changes since 1997.

Carolyn is the Community Manager for the Professionals for Association Revenue. Carolyn coordinates PAR's online content and is the host of PAR webinars. If you have a unique association story or strategy to share, email Carolyn at Carolyn.Shomali@MyPar.org

← Approach Your Suppliers as Collaborators and Improve RevenuePoll: Digital Non-Dues →

This website uses cookies to improve your experience while you navigate through the website. Out of these cookies, the cookies that are categorized as necessary are stored on your browser as they are essential for the working of basic functionalities of the website. We also use third-party cookies that help us analyze and understand how you use this website. These cookies will be stored in your browser only with your consent. You also have the option to opt-out of these cookies. But opting out of some of these cookies may have an effect on your browsing experience.
Necessary Always Enabled
Necessary cookies are absolutely essential for the website to function properly. This category only includes cookies that ensures basic functionalities and security features of the website. These cookies do not store any personal information.
Non-necessary
Any cookies that may not be particularly necessary for the website to function and is used specifically to collect user personal data via analytics, ads, other embedded contents are termed as non-necessary cookies. It is mandatory to procure user consent prior to running these cookies on your website.
SAVE & ACCEPT
×